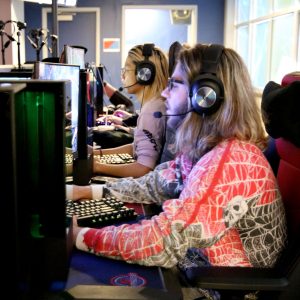 (HOWELL, MI) Cleary University will host its first 3v3 Rocket League Open tournament on Saturday, July 9 at the university’s Esports arena, located inside Cleary Commons. Check in begins at 10 am and matches start at 11 am. The winning team members will receive athletic scholarships to compete for Cleary’s own Rocket League team.

This free event is a great spectator sport. You can watch select matches on the Cleary Esports Twitch account or view the broadcasted matches in Cleary Commons during the competition.

Jarod Ericksen, Cleary’s Esports Varsity coach, was hired in early 2021 to launch the program at the university.

“The level of excitement around campus about Esports is inspiring,” he announces. “Many students find success not only through academics, but also through sports. Esports draws a completely new population of students who previously weren’t involved in athletics. Now they have a sport specific to their talents.”

Coach Ericksen always is looking for more ways to engage the community in this sport by offering youth camps and other activities to encourage participation in this increasingly popular sport. Another way Cleary Esports has been involved with the community is through coaching. A few Cleary Esports athletes help the Ravens Esports teams at Howell Innovation Academy, a local alternative high school, by dedicating a few hours every week to working with Esports athletes to improve their games.

“We have a group of positive, energetic individuals who understand teamwork,” Coach Ericksen notes. “I’m excited about the opportunity Esports provides these young athletes.”

“The impact of this program is huge and is only going to grow even bigger,” Coach Ericksen points out. “I’m proud to be part of such a groundbreaking sport that finally is receiving the acknowledgement it deserves. Literally thousands of students now have an avenue to exhibit their skills, knowledge and talent competitively.”

A former soccer player and coach, Ericksen is an accomplished Esports athlete himself, in fact, he is among the top 1 percent of players nationwide in League of Legends and Hearthstone.